LocationDigital Health
DescriptionTranstibial amputations (also known as below-knee amputations) significantly affect patient gait. As patients attempt to establish normal, pre-amputation gait patterns, the health of the intact, or non-amputated, limb may be compromised as it assumes a greater supporting role in maintaining normal gait patterns (Gailey, Allen, Castles, Kucharik, & Roeder, 2008). While patient tendencies towards this behavior stem primarily from a desire to achieve normal gait, increased dependence on the intact limb also stems from a desire to minimize pain in the residual limb, as well as poor prosthesis fit caused by changes in residual limb anthropometry over time (Barnett, Vanicek, & Polman, 2013). Specifically, hip, knee, and ankle joints in the unamputated limb deteriorate as transtibial amputees typically perform higher effort hip extensions, ankle dorsiflexions, and knee flexions as a means to compensate for limited movement of the amputated side (Bateni & Olney, 2002). This deterioration can result in knee or hip replacement surgeries. This is alarming, as an estimated 74% of lower-limb amputations are transtibial (Johannesson et al., 2009). Many transtibial amputations are the result of trauma, diabetes, or other vascular diseases and the surface geometry of limb residuum (and consequently prosthetic fit) are greatly impacted by anthropometric changes due to these conditions (Narres et al., 2017). While an abundance of data has been collected regarding the kinetics of below-knee amputee gait, little control over the variation of anthropometry of patients is possible. In particular, loading and gait patterns of healthy patient limbs as a function of anthropometry has not been heavily investigated, presenting a gap in the literature. Therefore, the main objective of this proposed work is to study the impact of transtibial amputation on the long-term health of the intact limb.

Past studies employed several methods to quantitatively understand the variations in biomechanics of below-knee gait post-amputation. Winter & Sienko (1988) performed a range of biomechanical analyses and EMG profiles on eight transtibial amputees with prostheses and compared their results to healthy subjects. Their study revealed that the type of prosthesis used by the amputee plays a crucial role in flexion and extension of the major joints during each gait phase. A similar study by Powers, Rao, & Perry (1998) revealed that transtibial amputees were found to have considerably higher activity in the knee flexors and extensors relative to healthy subjects during normal gait. While an abundance of data has been collected regarding the kinetics of transtibial amputee gait, little control over the variation of anthropometry of patients is possible. In particular, loading and gait patterns of healthy patient limbs as a function of anthropometry has not been investigated.

Simulation-based gait analysis has proved to enhance the understanding of amputee gait and serves as an alternative to human subject testing. OpenSim, a biomechanical modeling software (Delp et al., 2007; Seth et al., 2018) allows for analysis of forces on a variety of musculoskeletal components, which can be useful in analyzing stresses on limbs as a function of anthropometry, among other factors. One previous study (LaPrè, Price, Wedge, Umberger, & Sup, 2018) employed OpenSim to understand the interaction between residual limb and prosthetic socket geometry as a function of motion of several lower-limb muscles. This study was able to generate a realistic, scaled model of a transtibial amputee using anthropometric data coupled with prior knowledge of residual limb geometry.

Based on prior literature, biomechanical simulation software such as OpenSim is found to be a promising tool in analyzing gait of transtibial amputees. Modifications to patient anthropometry are impossible to observe in a single clinical visit, and could take years to manifest, but such variables are very manageable using the capabilities of OpenSim. As such, this work will focus on including anthropometric variation in assessing the gait of transtibial amputees while also examining long-term effects on the health of the patient’s intact limb. The following two research questions are framed based off the overarching goal of this proposed work:
1) How does the anthropometry of a transtibial amputee affect the stresses in the contralateral limb when compared to an able-bodied subject?
2) How does the anthropometry of a transtibial amputee and the affected gait of the amputated limb affect the response behavior of the contralateral limb?

This study utilizes OpenSim, a biomechanics simulation package, to investigate the impact of anthropometry on the stresses and response behavior of the hip, knee, and ankle joints in the contralateral limb of transtibial amputees. Six total groups, comprising of able-bodied and left amputee variants of three anthropometric percentiles (5th, 50th, and 95th) were defined. Musculoskeletal geometry, gait, and ground reaction force data for each model were sourced from a healthy subject and appropriately adjusted based on trends in amputation status and anthropometry from literature. Inverse dynamics operations were performed on each model, yielding normalized moment data as well as a calculated moment proportion, quantifying the relative stress on the right, contralateral limb. The interaction between anthropometry and amputation was significant for amputees during stance phase, where the 95th percentile model had a significantly higher moment proportion compared to other percentiles. Results indicate the need for special clinical focus on the ankle of heavier, taller amputees, along with the prescription of appropriate prosthetic componentry with a sufficient range of motion, to prevent long-term joint damage within the lower extremities. Initial data is preliminary, but serves as a foundation for additional simulations and related work in biomechanics simulations. 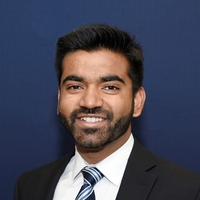